Despite a tough battle on both sides of the ball, JV black never quite got it going and fell 24-0 to the Humble Wildcats. With a lot of new faces on both sides of the ball, offense struggled in the red zone and defense fatigued in the second half giving up two late scores. Offense was led by Noah Estrada, Matthew Ramirez and the rest of the offensive line. Defensively big stops were made by Franco Godoy, Roland Alanis, and  Favor Osizugbo.

Congrats to the Mav sophomore Teal team for defeating Humble by the score of 21-14. It was a great team effort! 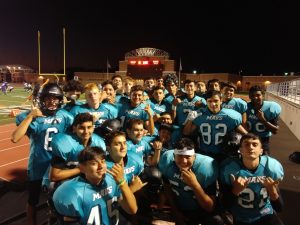 Though the score may not reflect, the Mavs played one of their best games of the year, against an always powerful Humble Wildcat Team.  Defense led the attack.  Strong play defensively was played by Kevin Eppling.  Safeties Michael Jiminez and Christian Ibarra also led a strong defensive attack.  Offensively, the Mavs were led by Hayden Stallings, along with Everrett Epps.
Next up, an always fundamentally strong, Kingwood Mustang Team. 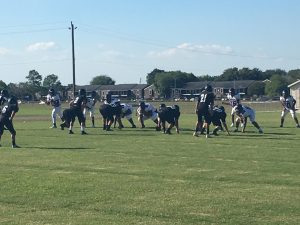 The freshman B team lost to Humble 34-6.  After a rough first half, the Mavericks really stepped up their play in the second half.  The Mavs capitalized on a strong 70 yard drive right before the half.  Quarterback Isaac Mendez pounded his way into the end zone for the score.  On defense the Mavs got a great effort from Tristan Jones and Aiden Blackmon.  In the second half the Mavs were able to run their hurry up offense and rack up some good yardage.  Jesse Cano led the offensive attack.