The JV Black team lost 28-8 Thursday night. Both sides of the ball could not quite make the big play to keep momentum going when it counted. Offensively, the Mavs had big plays from Noah Estrada, Ben Still, and WR Donovan Lomas. The Mav defense allowed 10 points up until the third quarter but despite the aggressive play of Franco Godoy, Roland Alanis, they fell to fatigue in the second half. 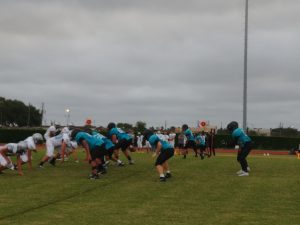 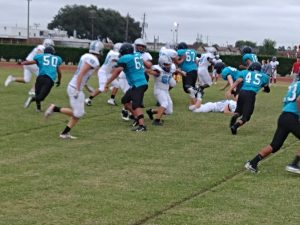 Freshman Black 6-14
In a much anticipated match up, the Memorial Mavericks took on the South Houston Trojans. In the end, the Mavs would come up short, losing 14-6.  The game started off as a defensive battle of field possession.  Defensively, the Mavs were led by Everrett Epps, Kevin Eppling, Christian Ibarra, and Kalup Edwards.  Edwards would later intercept a Trojan pass and return it for an 85 yard touchdown.  Offensively, Hayden Stallings passed the ball well, connecting on passes to Michael Jimenez and Christian Ibarra.  Good hard nosed running was led by Epps.
Freshman Teal 22-30
The freshmen B team once again competed hard from start to finish against Clear Falls.  Unfortunately the mavs came up one score short and fell 30-22.  Jesus Garza scored his first touchdown of the year on a powerful third quarter run.  Silas Herrera also caught a 50 yard touchdown pass from Isaac Mendez on a double pass.  Leading the way offensively again for the Mavericks was quarterback Isaac Mendez and running back Jesse Cano.  Jesus Garza also recovered an onside kick late in the fourth quarter to give the Mavs a fighting chance.  Defensively the Mavs were able to get some key stops on the night.  Leading the charge were Ayden Blackmon, Noah Rodriguez, and Abel Garcia.  For a team with low numbers, multiple players going both ways, and being injury plagued, this team continues to go out there and compete.
Mavericks Official Sponsor
Apr
07