The JV Black ended their season with a 36-0 loss to the Dobie Longhorns. Despite what the score board showed, tough play and persistent effort was shown throughout the game. Offensively the Mavs were led by Noah Estrada, Matt Ramirez, and Roland Alanis. Defensively  _________ Chumba, Jesus Zambrano, and Tony Gonzales.

The Pasadena Memorial JV Teal loses another nail biter last night vs the Dobie Longhorns 20 to 14. Like usual the Mavs played with a lot of heart and physicality but were unable to overcome 2 first half fumbles inside the Dobie 5 yard line. Defensively the teal were led by Quincy Swain, Cameron Schilib, Oscar Vallejo and Antonio Gonzalez. Offensively the first Maverick touchdown was scored by Ismael Gonzalez on an 80 yard kickoff return. This touchdown gave the Mavs life as they took the lead 8 to 6 after a Cameron Schilib 2 point conversion. The second Maverick touchdown came from 8 yards out from the arm of Roger Orellana to Isaac Garcia who ran a slant route for the score. The 2 point play was unsuccessful. After taking a 14 to 6 lead the Longhorns scored 14 unanswered points in the 4th quarter taking a 20 to 14 lead. The Mavs had one more shot at scoring and possibly taking the lead but came up short. The Maverick coaching staff is extremely proud of the JV Teal and the fight these young men exhibited all season. It has been a  pleasure coaching them. Parents we also want to thank you for your support! Go Mavs! 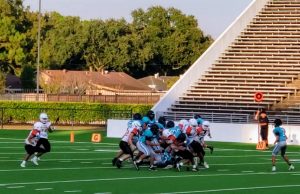 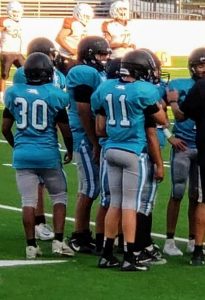 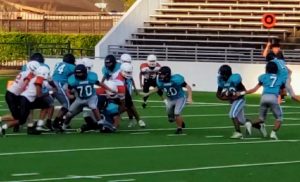 Freshman Black 0-41
The Mavericks put together one of their finest drives of the year.  Down 8-0, Hayden Stallings had a couple of clutch completions to Michael Jimenez and Christian Ibarra.  Everett Epps again was the workhorse carrying the ball with nearly 100 rushing yards.  The Offensive Line played a big role in these rushing yards.
Defensively, the Mavericks were led by numerous hard working players.  Forced fumbles were made by Ivan Puga and Matt Leal.  Adrian Villarreal and Jimenez played strong defensive back rolls in holding down the Longhorn passing game.
It was the last game of the season, however there were many positive aspects to this year, and the Mavericks have a lot to build from for the future.
Freshman Teal 0-36
The freshman B game vs Dobie had a familiar theme for the Mavericks.  Outnumbered, and out sized were the Mavericks once again.  The Mavericks fought though and gave their best efforts.   The size, speed, and numbers of the Longhorns ultimately proved too much though.  The Mavs were able to get some offense rolling as usual, just unable to capitalize.  Josh Marquez had a good game for the Mavs offensively, and even brought in a nice interception as Dobie was driving to score.   Evan Jimenez had some nice blocks at the receiver position to free up Marquez.  On a positive note, the Mavericks had a penalty free game and got Dobie to jump multiple times.  Though the wins didn’t happen for the Mavs team this year, one could certainly respect their fight
Mavericks Official Sponsor
Mar
31

Tennis Event
8:00 am
View All Events