The JV Teal Lost to the La Porte Bulldogs yesterday by a score of 36-6. The Mavs moved the ball well but had issues taking care of the football turning the ball over 3 times, with 2 fumbles and 1 interception. Although the offense was clicking on the ground and the air, Lack of ball security made the performance all for naught.  Turning down tackles on defense was an issue from start to finish.  The Bulldogs ran the football with extreme efficiency only having one pass attempt all game.  Players who stood out were two-way player Tristan Jones and Joshua and Geraldo. Jones had the lone Maverick score with a 55yrd run. On Offense running back, Joshua Geraldo ran like his hair was on fire burning through the defense getting chunks of yardage on each carry. The offensive line was the best unit Yesterday with Big Jacob Perry leading the way filling in at center.  Isaac Mendez played outstanding at defensive tackle racking up 4 TFL in limited action on defense. In the end, the Mavs defense just could not get off the field when it counted most. The JV Teal will travel to play the Clear Falls Knights next week.

Last night the Mavericks traveled to face the always tenacious South Houston Trojans.  Offensively the Mavericks were led by Jaylon Bell who had a 60 yard TD run with Carlos Amaya converting the extra point.   Defensively Diego Martinez, Jamal Robinson, Jaelyn Nowlin, and Isaac Campos dished out devastating tackles.  Unfortunately, the Mavericks came up short and lost 12-7.  Next week they take on the Channelview Falcons. 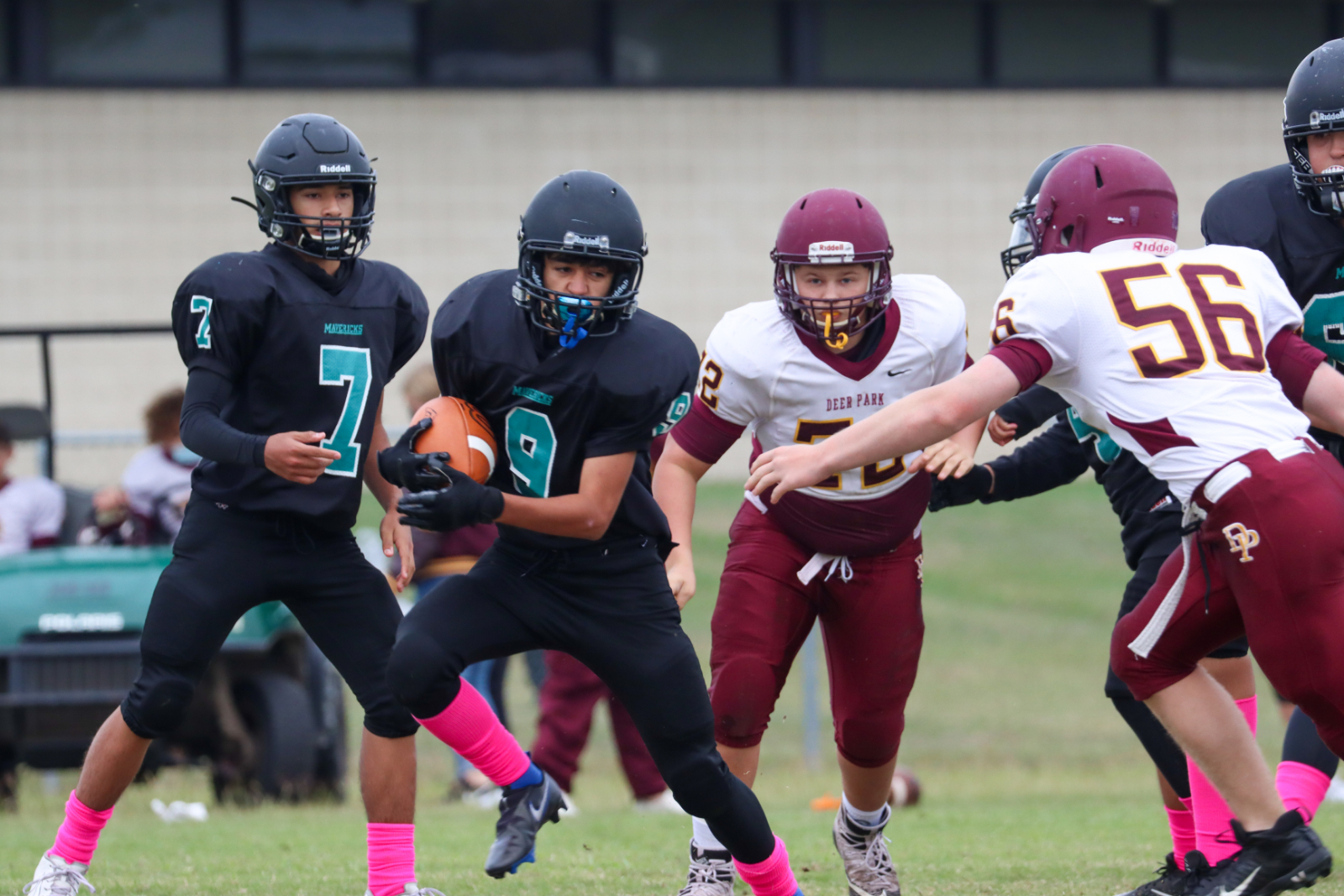 by Coach Melancon and Coach Jones

After what would seem to have been an unfortunate, but yet fortunate game day for the MAVS freshman (white) team; as some would call it redemption. The Mavericks were able to redeem themselves, as we hosted the Deer Park Deers for the second week in a row due to a lack of teams available. After coming up short last week 12-7 at Deer Park, the MAVS couldn’t have been more excited to regain confidence and prove that they would not beat themselves again. The MAVS came out strong and ready to play, as the offense started strong this week. The run game was tremendous from start to finish. Leading the offensive line, center Zach Rodarte was able to get his fellow MAVS geared and going. QB Adrain Lerma, RB Mathew Gonzalez, and Isaiah Torres all had superior games on the ground. From the receiving core, each of the guys (Tyler Cooks, Able Perez, Adam Gonzalez, and Alejandro Garcia) played their part in doing what was needed making key catches at the right times during the game. Surprisingly, for the first time this year, the MAVS defense did not force a turnover. However, the guys did show up ready to play and did all that was asked. Our defense was led by our Defensive Ends Tyler Cooks, Justin Logan, Evan Troung, and Alejandro Avina. They made huge plays and helped get stops when the MAVS Defense need it most. The biggest stop of the night came with 1 minute left in the 4th quarter and Deer Park was on the 30-yard line on 4th and 10. Alejandro Avina got in the backfield to sack the QB and seal the victory for the MAVS. It was yet another exciting game between the Deer and the MAVS that came down to the wire. However, it was the MAVERICKS, who sealed the deal and wrote the script. As always, the MAVS are excited to take on whoever our next opponent may be. Maybe a tiebreaker or maybe someone NEW.
#MAVPRIDE

No Events This Week

Events are added by athletic staff.
View All Events