The Memorial Maverick JV football team took on the Dobie Longhorns at home yesterday in a much-anticipated rivalry game.  The Dobie Longhorns won the game 34 to 28 in a game that came down to the wire.  The Longhorns jumped on the Mavericks on the first play of offense breaking a 65 yard run down the right sideline as the Mavs haven’t seen a running back that fast all season.  The Mav’s first attempt on offense resulted in a 3 and out as it was looking like it was going to be a long day.  The Maverick defense woke up forcing a Dobie punt which also woke up the offense.  The offense never looked back the rest of the game.  Quarterback Hayden Stallings ran the offense with confidence as he was able to pass the ball to a multitude of receivers.  Running back Gilbert Partlow also had a great game as he was able to score as a runner and a receiver.  Defensively the Mavericks were able to force some punts but the Dobie offense was also very potent.  The game was tight all afternoon and the Mavs had a chance to go ahead in the final minutes but a failed missed extra point kept the score tied at 28.  The Horns were able to break another long 70-yard run with only 1:32 left on the game clock putting them ahead 34 to 28 as they also were not able to tack on any extra points.  The Mavericks had one more shot to win the game but were unable to complete any of their last 4 pass attempts and the game finished with an interception and time expiring.
Notable defensive players: Chris Jimenez, Cameron Schilhab, Josh Mendoza, Anthony Chuckwuma, Keion Williams
Notable offensive players: Abel Aguirre (TD), Devon Manganaro (2 pt conversion), Xavier Garcia, Roger Orellana, Darius Carr. 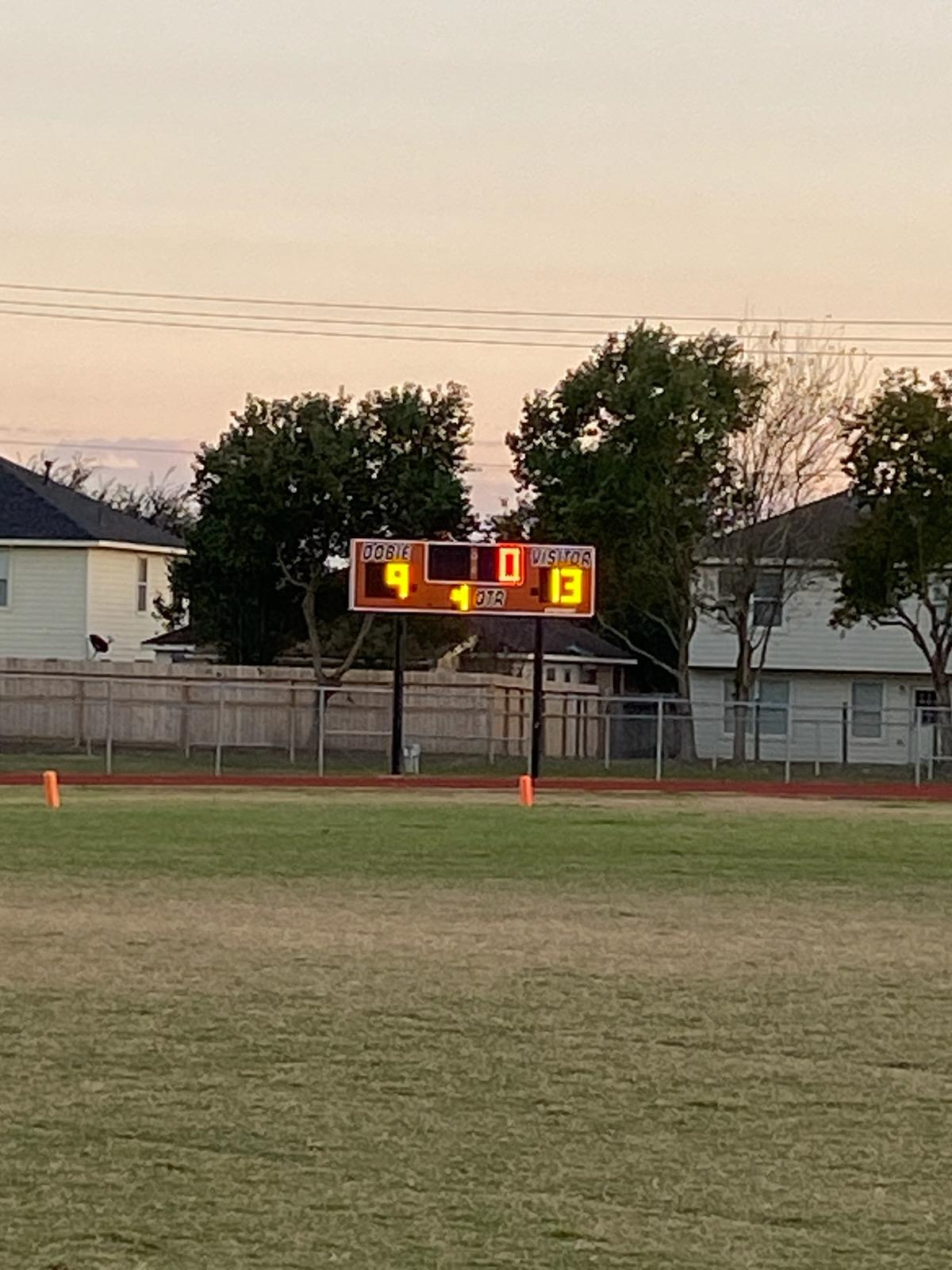 It was an emotional homecoming of sorts for Offensive Coordinator, Terry J. Garza having returned to his old stomping grounds.  With a pre-game ceremony for the retiring of Robert Beynaert’s Freshman Jersey, the tone was set for something big to happen, and boy did it.  The# 2 ranked Dobie Longhorn Offense started the game with a long, clock-eating drive.  However, the Maverick Defense was able to stymie that drive on their own 6 Yard line.  With 2:32 remaining in the 1st Quarter the Maverick Offense finally got the ball back but were able to capitalize.  Jayvian Nowlin broke free for a 62-yard scamper to start the scoring.  Nowlin would finish the day with 91 yards rushing.   The extra point was successful by Carlos Amaya.  After that, the game was a defensive battle, with the Mavericks winning 7-2 at the half.  The Longhorns came out in the second half with a score, putting the Mavericks down 9-7.  Having been contained a bit throughout the game, Jaylon Bell made his mark with 5:31 left in the game with a 43-yard pass/ scramble, making numerous tacklers miss.  Alejandro Mateos led the offensive line throughout the game.  After that, it was up to Coach John McGough’s Defense to do what they’ve been doing the past 3 games, shut down.  “We knew that Dobie’s Offense could strike any given time, it was no secret”.  However, the Defense came through, slamming the door and closing out the game.  Defensively the Mavericks were led by Joaquin Fernandez with an Interception, Alejandro Avina and Nick Perez.  Newly acquired Ri’Chard Crawford as constantly in the Longhorn backfield and anchored down the d-Line.

Next week the Mavericks take on an always tenacious Pasadena Eagle Squad.  Game Dates, Times, and Location has yet to be determined.

No Events This Week

Events are added by athletic staff.
View All Events